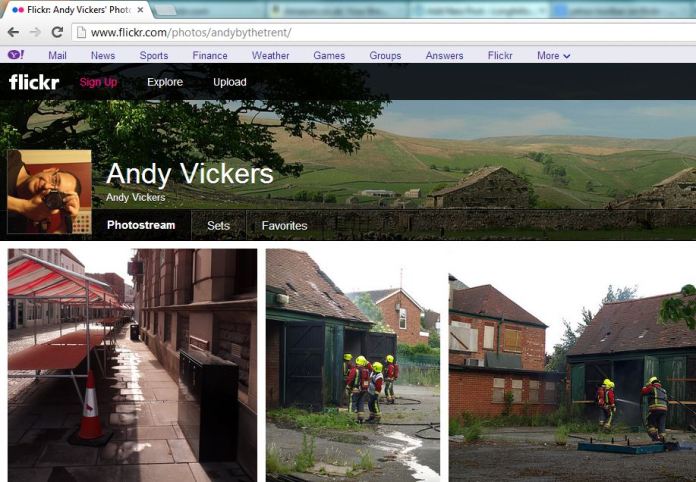 The home of my other creative endeavour is over at Flickr, a site that many say has been left to stagnate under the ownership of Yahoo mainly because it didn’t become the kind of social network that Facebook is.  The thing is that it started out as a photo sharing site and it still is, the recent makeover improved how your photostream was presented to viewers and in general it was still doing its job as an online portfolio of photos.

Today though something odd has happened and the Flickr community as a whole is not happy.  Me included.  The facelifted interface had a nice grey toolbar across the top, it was all very clean and modern looking, very professional, but today something else appeared, a lilac bar – referred to now by forum members as the Y! Barney Bar – displaying links to other Yahoo sites and services.

As many commenters have said it looks like something from a nineties website, wedged between your browser’s chrome and the elegant Flickr interface, a distracting layer of pink nougat taking up screen space and cheapening the experience for your viewers.  The thing that has annoyed most people though is that many of us pay to have an ad-free interface both for our own use and for those viewing our photos but this amounts to an advert for Yahoo’s services, driving viewers to the ad-land that is Yahoo’s main site, to gather more revenue.  Yahoo staff have said that “The idea is to make it easier to access other places in the Yahoo! network and make visiting Yahoo! pages a more seamless experience.” and that it brings your photos to a wider audience.  If that’s the case add another menu item to Flickr’s own toolbar not this monstrosity.

Many users have pledged to leave altogether if it’s not removed immediately but most think it’s unlikely because Yahoo are copying Google’s trend of having the toolbar at the top of everything, but at least Google’s bar fits in.  What you’re paying for on any site like Flickr or our home here at WordPress is the avoidance of your content being juxtaposed with adverts which may detract from what you’re trying to say or the aesthetics of your site, to make it feel like your own space not part of a larger corporate behemoth, that is what the Yahoo bar makes Flickr feel like – just a part of a search engine and internet portal, it takes the shine off the presentation, makes it feel less special.

Some commenters have said that at least this hasn’t happened to the sites of our blogging brethren over on Tumblr – but as Yahoo haven’t had much time with its new purchase as yet perhaps it’s only a matter of time.